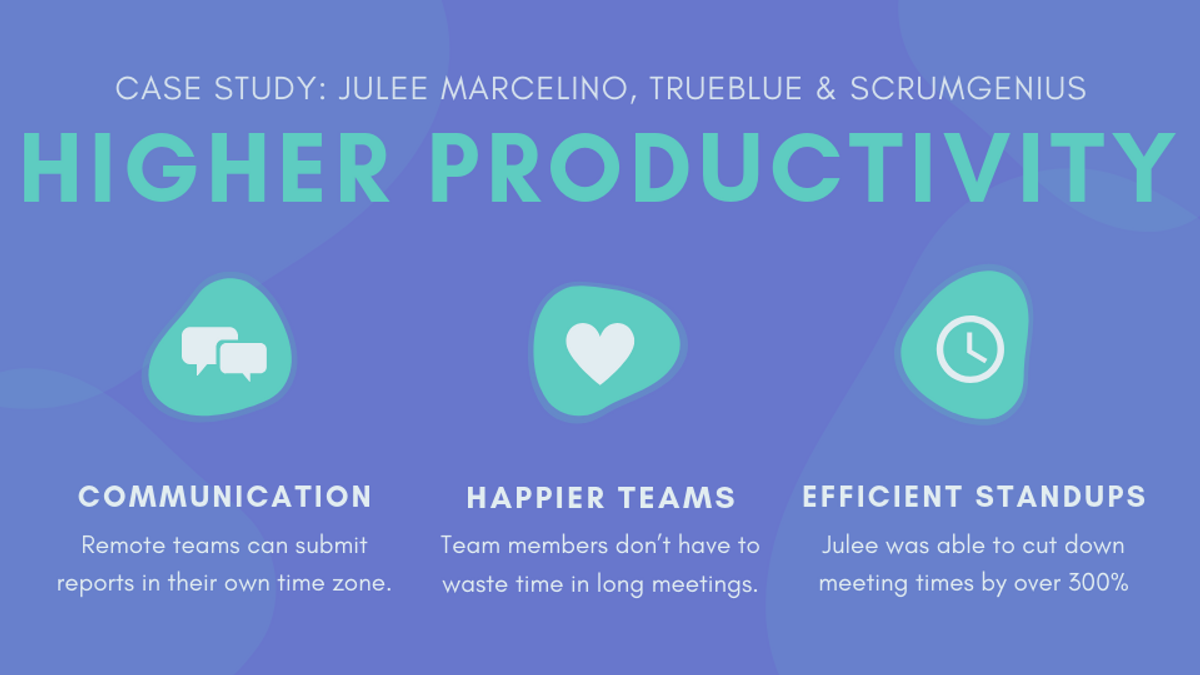 Julee Marcelino is an IT manager at TrueBlue, and it’s her job to oversee the off-site teams at her company. Her teams are spread out all over the world, including onsite in Tacoma, around Washington state, Colorado, and off-shore in India.

But remote teams come with their own set of difficulties, and Julee finds that communication between team members in different time zones is often highly inefficient and leads to a lot of wasted time during the workday.

She and TrueBlue use ScrumGenius to cut down on wasted time in in-person stand-ups and better connect with off-shore team members.

Julee’s job managing TrueBlue’s application and database teams keeps her busy. Before ScrumGenius, one of her tasks was to manually collect everyone’s standups and send them to her director, a job that proved difficult.

Julee found that the entire process was inefficient. When she first took over the team, they were implementing a daily stand-up that required people to gather in the morning for at least half an hour to go over what was going wrong and what everyone was working on.

Unfortunately, the person who held these meetings wasn’t gathering these details beforehand. Instead, he was taking notes during the meeting, taking up a lot of crucial time just to gather the necessary information. And because they had to go through the entire team, they couldn’t spend time on individual things that affected workflow like blockers and goals. Often, that meant those blockers and problems went unsolved.

“We didn’t spend enough time on things. Somebody would bring something up or talk about a blocker, and that would be the end of it unless we wanted to extend the meeting. It was information gathering, not a conversation.”

This problem was even worse with off-site team members. Julee wasn’t able to get the information she needed from them, and the distance—especially between her and her team members in India—made communication during the workday hard.

Julee needed to find a way to automate the process and take out the inefficiency in communication within her teams, and she used ScrumGenius to do it.

ScrumGenius allows Julee to review everything before her daily standups, so she knows what questions she needs to ask to keep up productivity.

Now, everyone is required to submit their Scrum reports before the in-person standup. This cuts out the prep work previously required and means less time is wasted taking stock of everyone, so meetings can be much more discussion- and action-oriented—and foster the communication they were missing before.

This is particularly helpful for her off-shore teams. Instead of not receiving important information, teams can simply report their blockers and issues as well as their weekly accomplishments in their standups. Even better, they can do so in their own time zone, making things easier for everyone.

“We weren’t getting the information that we needed and our teams in India felt very disconnected. Now that they can report their weekly accomplishments in their time zone. It makes it a little bit easier to bridge that gap.”

Julee and her teams also enjoy ScrumGenius because it allows a lot of opportunities for customization. She has two Scrum reports she assigns to; one is the daily standup she uses to make in-person meetings more efficient, and the other is a weekly report that allows employees to log what they’ve accomplished.

Julee’s questions themselves are unique. Although she uses the set three prompts—did you complete your last check-in’s goal, what are you working on today, and do you have any blockers—Julee also adds targeted questions depending on the day.

These questions, such as whether they’re working in-office or remotely and how many tickets they have in their queue, allow her to have a better idea of her team’s productivity. Julee and her director also carry out “temperature checks” on their employees through ScrumGenius to make sure everyone is in a positive headspace. This lets Julee know if a team member needs extra support.

Most importantly, Julee knows that if she has a concern with the software, she will get a prompt and courteous response from ScrumGenius. Whenever she or any other customer has a question or issue, it always gets resolved quickly.

“I’ve been really impressed with the responsiveness when I’ve submitted tickets or questions. It was like, “Oh my God. That is really fast.” Whenever I’ve had questions or problems, they’ve been resolved really quickly.”

ScrumGenius allowed off-shore and remote teams to submit their Scrum answers in their own time zone, facilitating the flow of information between employees in different places.

With ScrumGenius, employees no longer had to waste their time in long meetings, and through the use of a “temperature check” Scrum question, Julee could easily find out if any of her team members needed extra support.

Simply by automating the stand-up process, Julee was able to cut down meeting times by over 300% and make them much more action-oriented.

With ScrumGenius, Julee’s standups have been cut down from over half an hour to just ten minutes long, and have entirely cut out the need for prep work. No one has to take notes or spend a half hour on setting up for the meetings anymore.

The weekly report also helps Julee’s team fill out their year-end goals list. Through tracking their accomplishments and challenges every week, team members now have all the information they need for their goals list easily accessible, instead of having to go back and try to remember everything in retrospect.

Employees now miss less information, so their reports can be more complete and more accurate. Even better, with a weekly record to review, team members can identify patterns or problems that get in the way of productivity and work to get rid of them, creating a much more efficient workflow.

“It’s a good opportunity for us to see where everybody is at so they can measure themselves. If they’re reporting, “hey, I didn’t learn anything new this week,” or “I haven’t made any steps towards advancing my career or personal goals this week,” too many times, they’re not going to hit their targets. It’s good feedback.”

ScrumGenius also makes Julee’s job much easier, as it automates many of the things she used to have to do herself. With the previous system, she had to go after her team and make sure they gave her their reports so she could prepare them and send them to her director on time.

Now, ScrumGenius packages their reports and sends them directly to her director, leaving everyone to do their jobs much more efficiently. ScrumGenius also sends her team members reminders to fill out their reports, meaning she no longer has to manually hassle them for information.

For Julee and her team at TrueBlue, ScrumGenius allows them to get rid of wasted time and better communicate goals and needs throughout the company.

“ScrumGenius packages it up. It doesn’t require prep work, and we get the information my director needs. It’s really made things easier for everybody.”