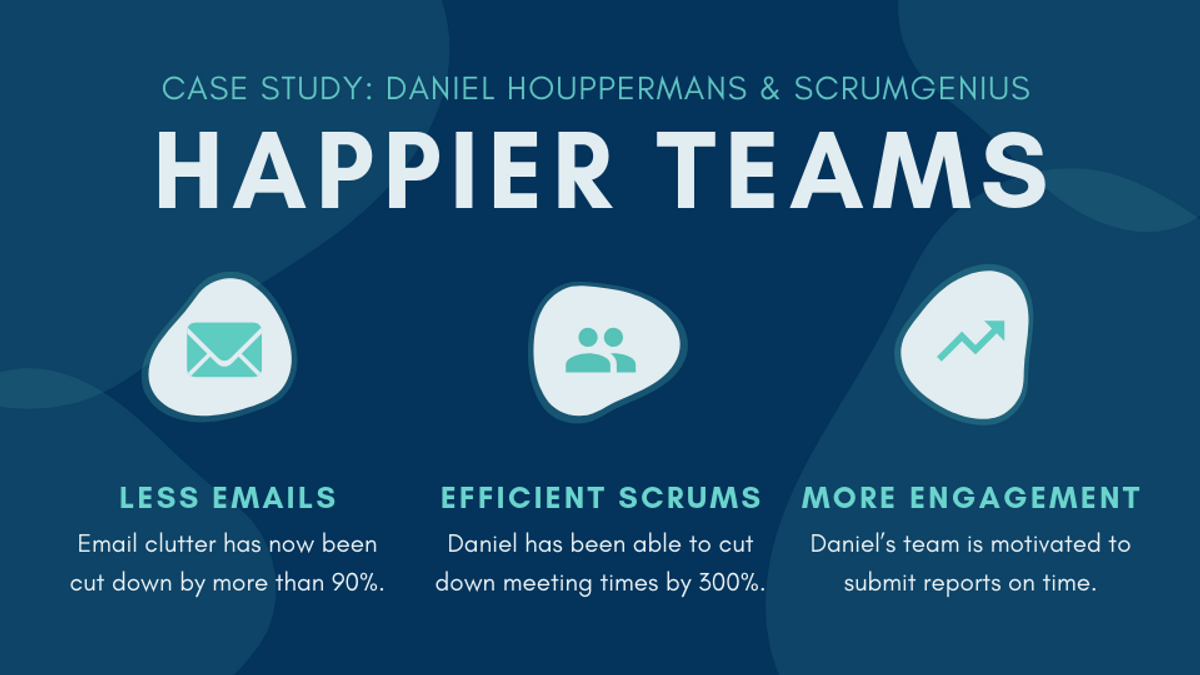 As a continuous improvement coach, it’s been Daniel Houppermans’ job for the last seven years to establish the tools to foster creativity and improvement in the workplace. Yet he found communication between co-located teams often fell short, and standups often missed crucial info that enabled team members to do their jobs efficiently.

With ScrumGenius, Daniel has been able to maximize his team’s productivity, communicate more efficiently and make better use of external programs.

“ScrumGenius has eliminated a tremendous amount of waste from the previous meeting format in terms of the amount of time it took to prepare and amount of time the actual meeting took. It helps us keep up to speed with what we're all working on.”

Daniel works for a local government in New Zealand. His team has a diverse range of functions that are always changing to suit different projects, and employees are co-located around eight different offices. Team members move around frequently between these locations and sometimes work from home.

This makes communication difficult because Daniel’s team doesn’t have a central meeting space. Not everyone could attend the same meetings, and thus the team was left with an uneven knowledge base. People who worked from home one day or were off sick wouldn’t know what had happened, further wasting time.

This meant Daniel’s weekly team meetings could last anywhere from one and two hours and were rarely discussion- or action-oriented. Instead, they often became sidetracked by going over the previous day’s tasks.

Daniel himself was often at the forefront of this: his inbox was continuously cluttered with emails asking for clarification or sharing missed details. This further took up time that could be better used completing tasks.

Finding a system that worked for Daniel’s team was also difficult. Previously, the team had used many different platforms for organizing information, but it was a Goldilocks situation—none of them fit quite right.

“We've tried using Office 365 tools in the past in isolation. We've tried using teams, we've tried Yammer and various other bits and pieces, but they just never stuck because we used so many different systems and so many individual tools.”

The setups that did work often required info to be spread across too many platforms, making work inefficient. And switching platforms was met with increasing resistance from his team, who feared that online standups would be a way for managers to micromanage staff.

Daniel had to find a solution that fit just right. And that’s when he came across ScrumGenius.

Daniel uses ScrumGenius with Microsoft Teams as a single ecosystem. ScrumGenius directly fixes the uneven knowledge base within Daniel’s team by providing them with a digital record to look back on.

For them, ScrumGenius acts as a single location to record and share information among employees, allowing for easier communication between people in different places without the need for constant clarification. Some of Daniel’s team also use ScrumGenius with external applications like Trello, so even more information can be stored in one spot.

The integration between ScrumGenius and Microsoft Teams is vital for Daniel’s team, as the ease of submitting standups with the click of a few buttons motivates members to submit their reports on time much more than a general email or chat-based system would.

“It's created a positive moment in the team to actually make sure we check in and share. It helps us keep up to speed with what we're all working on.”

The team’s fears around implementing ScrumGenius were soothed by showing the team demos of the product so they could see for themselves how it works.

Team members quickly realized that instead of facilitating micromanagement, ScrumGenius actually allows for less oversight. As it connects managers directly with the everyday goings-on of their team, managers now have to contact their team for updates less. Instead, they can simply view the reports and know what everyone is working on.

With ScrumGenius, Daniel has been able to cut down meeting times by over 300% and allow more room to discuss issues getting in the way of workflow.

The ease of submitting automated stand-ups has vastly improved response rates and motivated employees to submit their reports on time.

ScrumGenius has cut down the last-minute email Daniel gets by about 90%, because issues and blockers now take the focus in stand-ups.

ScrumGenius has cut down on the in-person meeting times for Daniel’s team. Now, their meetings last only about twenty minutes, less than a third of what it was before. By trimming down the fat of previous “catch-up” work, Daniel and his team can now connect better and leverage more opportunities.

The amount of email Daniel receives from his team has also been cut down by about 90%, as team members can now focus on what they need to discuss in meetings instead of getting distracted by going over the previous day’s tasks.

“We're getting a lot of value from ScrumGenius. If we switched ScrumGenius off today, we would probably all miss it quite a lot.”

Daniel and his team rely on ScrumGenius for their daily stand-ups and are very satisfied with the product. Daniel has even recently recommended ScrumGenius to a business connection, as he hopes it can facilitate the kind of efficiency for them that it has facilitated for his teams.