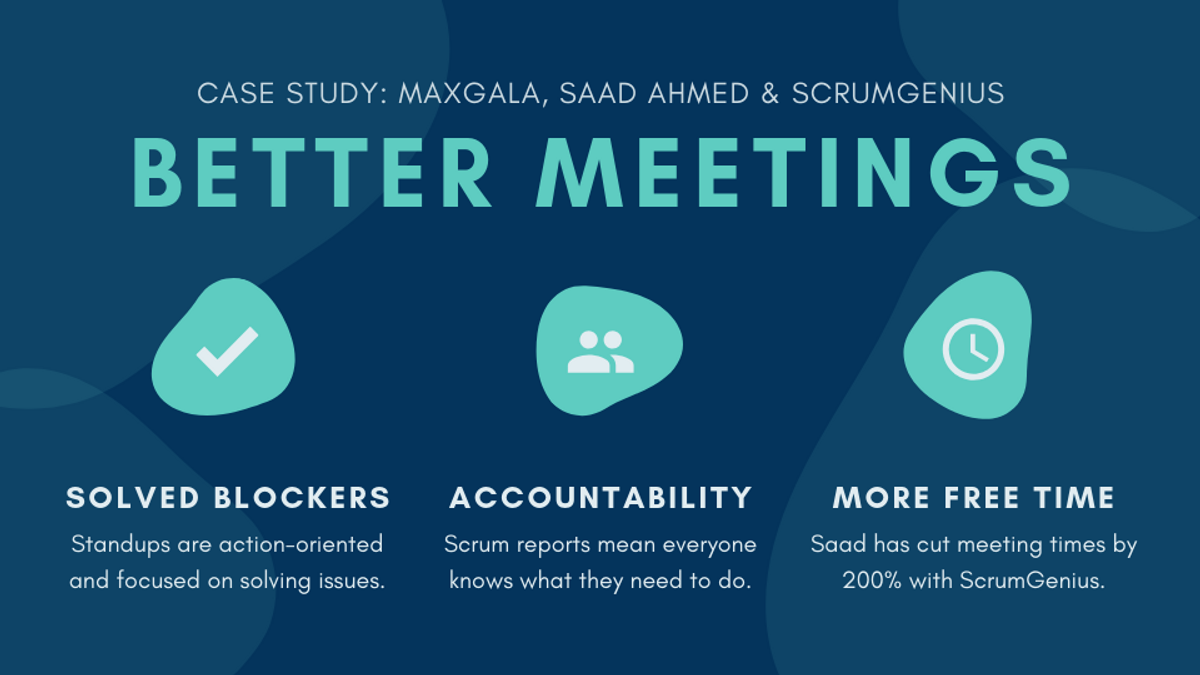 As head of the Youth Fellowship team and Chair of the MAX Mentors program at MAX, a non-profit with the aim of recognizing the achievements of Muslim-Canadians, Saad Ahmed usually has very little time to spare. Yet meetings with his volunteers and staff often took up far more time than planned and got sidetracked more than they tackled important issues, making his job harder and stretching him thin.

Now, Saad has been using ScrumGenius for the last five months to maximize the team’s productivity by erasing the need for follow-up emails, cutting down on meeting times and making team discussions more efficient.

Before ScrumGenius, Saad’s biggest ongoing roadblock was wasted time in stand-ups. With the Youth Fellowship, meetings routinely dragged on far past planned times. 45-minute meetings would often stretch to an hour or an hour and a half, and weren’t targeted towards blockers that affected workflow.

Although previous systems such as a Google document table worked at the time, they were labor-intensive and required extra pre-meeting preparation, further taking up Saad’s time. It also provided an added stressor, as Saad felt that his notes had to fully prepared before each meeting or else he would look foolish. But he found that his team often didn’t look at the notes even when they were completely prepared.

This left Saad scrambling to make sure everyone was doing what they needed to do. Saad found that he had to send hundreds of emails to follow up with his staff, which left him feeling like he was micromanaging them—a situation that’s not good for anyone.

Implementing new software and tools was also a problem, as he needed to find a solution that worked for both paid staff and volunteers. Changing software was often seen as more annoying than helpful, especially for volunteer staff who had less of an incentive to switch. Previous software such as Notion didn’t catch on, and most of Saad’s team didn’t use it.

Saad uses ScrumGenius to get rid of the need to verbally “catch up” on the previous day’s tasks, making meetings much more action-oriented. This allows Saad and his team to discuss the things that matter most: blockers and strategies that help push their momentum into the future.

Despite issues with implementing previous software, Saad found that switching his team to ScrumGenius was easy. All of the Fellowship team use ScrumGenius now and are quite happy with it. They particularly like how easily ScrumGenius integrates with the other platforms the team uses, such as Slack and Notion, so its addition feels seamless.

“ScrumGenius offers a nice way to collect people’s stand-ups and their information and display it to the rest of the team. Instead of having to say everything, you can actually discuss the action items. It’s allowing us to have more effective meetings.”

A shared sense of accountability

ScrumGenius provides Saad and his team with a digital record of stand-ups, thus creating a shared agreement between them on what needs to be done.

Automated Scrums allow Saad’s team to focus on problems and issues during in-person meetings so blockers can be dealt with efficiently.

With ScrumGenius, Saad was able to cut meetings down by up to 200%, leaving him with more time to support and assist his team.

Now, morning stand-ups take less than an hour at most. And while this extra time allows Saad the ability to give more support to his team, it also benefits the volunteers as well as the time they donate becomes more efficient.

Now, everyone knows what they need to do and when it needs to be done, creating a kind or organizational memory without the need for micromanagement or hundreds of emails.

With the use of ScrumGenius, Saad has been able to maximize the efficiency of the Youth Fellowship team, and has plans to recommend it to the larger Mentorship program as well.

“It’s helped me be as efficient with and focused on the things that actually matter. We have better discussions now.”